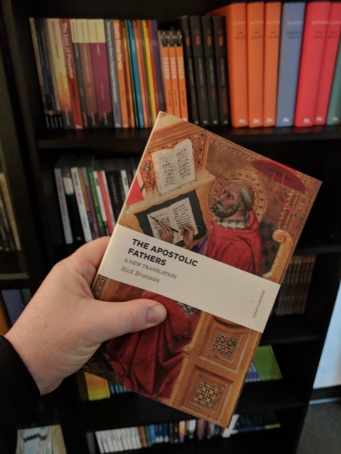 My translation of the collection of writings known as the Apostolic Fathers is now available in print! I’m super excited about this.

It’s been long enough ago that I don’t really remember when I had the idea. But looking back at internal records here at Logos, my Apostolic Fathers Greek-English Interlinear was listed on pre-pub in late February 2010. That jives with my vague memories because I think I actually started work on the Didache and Polycarp’s letter to the Philippians in 2009. Anyway, that was the project that started it all.

I woke up early pretty much every weekday morning after that to work on the interlinear. Through 2010 and into 2011, until the product was released in October 2011.

Sometime between October 2011 and October 2012, I must’ve had the idea to write a program to convert the translation embedded within the interlinear into an actual, bona-fide, English translation. So I did. Some text-wrangling ensued, and I generated translations that needed to be further edited and revised into a smooth, readable English text. The Logos version was released in December 2012, with a reverse interlinear alignment. I thought it was pretty much the coolest suite of stuff I’d ever be able to do (Interlinear, Translation, Reverse Interlinear), but it just got cooler. Because in December 2016, Lexham Press talked to me about getting the translation available in print. There were some bumps along the way, but we persevered, and the English translation is now available in print. Woo hoo!

You can purchase a copy of The Apostolic Fathers: A New Translation, from either Lexham Press (be sure to specify print) or from Amazon.

Side note: Because I was able to do it with the Apostolic Fathers meant I next wanted to try it with Logos/Faithlife’s Septuagint Interlinear. We rounded up some more contributors/editors (thanks, guys!) and the output of that process became the Lexham English Septuagint, available with a reverse interlinear.

3 thoughts on “The Apostolic Fathers: A New Translation is now available in print!”