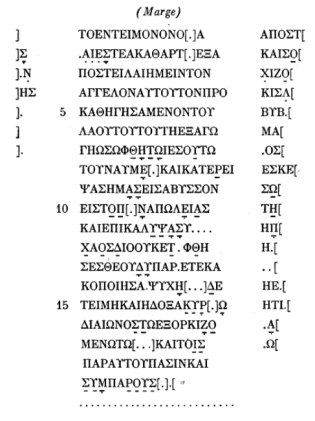 P. Fouad 203 (TM 63231), published in 1951 by Pierre Benoit, is a “prayer for protection against unclean spirits.” I came across it because it is mentioned in Hurtado’s catalogue of “Christian Literary Texts in Manuscripts,” found in appendix one of his book The Earliest Christian Artifacts.

Another very interesting thing about P. Fouad 203 is that most consider it to be Jewish, but can’t rule out Christian use or origin, especially if it is toward the later end of the date scale. van der Horst notes “Although it cannot be entirely ruled out that the text is of Christian origin, both the contents and the date of the papyrus make it much more probable that it has a Jewish provenance.”

The issue (well, from my view, I can’t say as I’ve seen this expressed in the literature) is that we’re smack dab in the middle of that weird time when Christians weren’t really a formal group. That is, there wasn’t really an institutional church. Many were still in the synagogue, and for these Christianity was an offshoot, or “splinter group” of Judaism. We see part of this even with the apostle Paul, who would go to synagogue but also meet outside of the synagogue with other Christians. At this point in time particularly, the difference between Christianity and Judaism (and how Christians and Jews practiced their faith) was much more of a spectrum than it was two poles that were easily defined. So I’m not so sure it is easy to define something as “Jewish” as opposed to “Christian” (or vice-versa) without explicit Christian material (allusion to NT, mention of Jesus, use of nomina sacra). And P.Fouad 203 has no NT allusion, no mention of Jesus, and no nomina sacra. But it does reference events from the OT, it does appeal to the power of God.

P. Fouad 203 is from a roll. This is another strike against viewing the text as explicitly Christian as most early Christian literary material is in a codex or it is written on the back of a used scroll. One mostly full column is extant, there are traces of letters from the surrounding columns, but not enough to reconstruct the text. Because it is from a roll, the (likely correct) supposition is that there were several other prayers and, perhaps, magical incantations (because, hey, we know there are all sorts of Jewish and Christian “magical” texts like this) collected in the same scroll.

Anyway, to the text of the papyrus itself. I was unable to locate an image of the papyrus, but I was able to “read” the ed. princeps (thanks, JSTOR for six free articles per month) by P. Benoit in Revue Biblique from 1951. (I say “read” because, of course, it is in French. I get the highlights, but any technical discussion is lost on me.) Benoit does include a transcription, which I reproduce below. Note I only reproduce the column, I do not include the traces of the bordering columns.

And here is a translation I banged out. It is overly literal, and (for the most part) respects word order of the Greek. I have not been able to give this much attention, so if you see something wacky, please let me know.

The appeal is to the one who lead the Israelites out of Egypt. No mention of Moses, but a probable mention of Joshua, son of Nun (though this is muddled in the papyrus, it is the only logical possibility). van der Horst notes this God who freed Israel “is here invoked to use this power by throwing the unclean spirits who keep someone in their nefarious grip, into an abysmal place of annihilation” (125).

Would early Christians (and Jews) use prayer as a power formula to try to make God do what they wanted? Well, yes. Remember P. Oxy. 924, a prayer against fevers? Would we do the same thing? Sure. Is it right? Well, for my part, I think it is totally appropriate to glorify God and remember the great things he has done while praying to him. I also think it is totally appropriate to make requests of God in prayer. However, I don’t think it is appropriate to link the two (“God, you’re so awesome and powerful and one time you did this awesome thing, now do this thing for me because you’re awesome and powerful.”) If we treat God as a puppet whose strings we can pull by saying the right thing, or if we believe we can obligate God to act by recalling similar actions of his in the past, we make the same mistake the prayer in this papyrus makes.