My frequent co-conspirator Ken Penner and I, with the assistance of Nick Meyer, have been working on something I pitched to Ken last summer: The Lexham Dead Sea Scrolls Hebrew-English Interlinear Bible. We chatted about it in November at SBL (at a very yummy churrascaria) and early this year began working on it.

There is more to do, but a version of the text (minus 1 & 2 Samuel, which are still being worked on) slipped in to various Logos 7 packages. Here’s what it looks like: 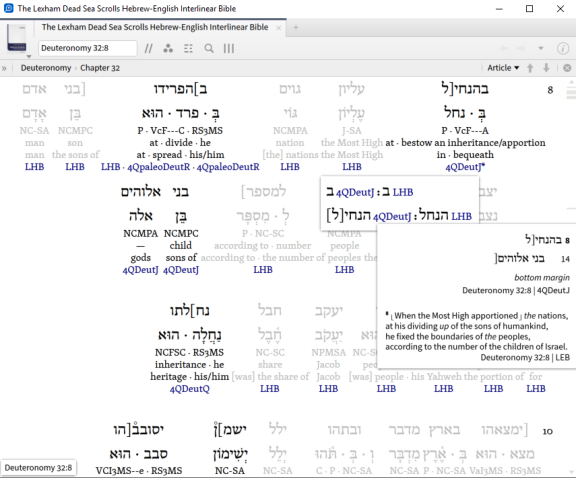 In the above, the light grey text is the text of the Lexham Hebrew Bible (LHB). Interlinear units that contain material from the Dead Sea Scrolls (DSS) is in black, though brackets do note the inclusion/exclusion of LHB text. Two layers of interlinear glosses are included, and the source of each reading selected is noted. When a source has orthographic (spelling) variations in other DSS sources or is at orthographic variance with the LHB, an asterisk notes more information on these differences including a link to the transcriptions in question.

What is the basis of the top line text / selection of readings? Ken Penner addresses that in the introduction:

Where more than one manuscript preserves part of a biblical text, the reading selected is the oldest complete word preserved in the Scrolls. The scroll dates used for this purpose are those collected by Webster’s Chronological Index of the Texts.

Our procedure for handling cases where no manuscript has completely preserved a word is to consider the letters individually.

Further, it uses the lemma and morphology scheme used by the Lexham Hebrew Bible, so one can search both resources contemporaneously for lexical or morphological criteria, or even use the “Corresponding Words” and “Corresponding Selection” features of Logos Bible Software to compare the texts side-by-side.

We’re excited about this resource and its future, and glad we could get a version of it into Logos 7.