The other day, I ran across the following stuffed deep in my office bag. It had to have been from a pre-2009 SBL (2007 because I didn’t go in 2008?). That means it migrated across 3 different bags at minimum. Astounding.

Check out this incredibly optimistic (in hindsight) timeline for the NA/UBS editions. I distinctly remember taking these notes. 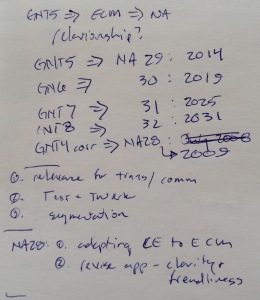 Please note: I’m not criticizing the ambitious nature of this timeline. I love it — goals and targets are good things. I just thought it interesting that there was a publication plan and milestones for that plan have existed for awhile. The publication dates are synced with releases to the ECM, so I’d guess the next NA edition will include material for Acts and perhaps John and maybe even Revelation (which would be very cool).

Whatever the case, I’m sure that the current plan is much different than the above. Difficult, complex projects take a long time, even with well-planned milestones. Bring on NA29, whatever changes it may contain!