As I shared in a previous post, one of my projects for 2018 (and 2019, likely) is an introduction, translation, and brief commentary on the Acts of Pilate, which is also known as the Gospel of Nicodemus in its Latin tradition.

Most of you know that my day job for the past two decades (wow, now I feel old) involves processing and analysis of texts in the Biblical languages (Greek, Hebrew, Aramaic, Latin) and also English. So I’m a little peculiar in how I approach a project like this.

Unfortunately, creating and annotating the electronic edition is usually the most labor intensive portion of the whole task. But it is also, to me, the most valuable. If I didn’t care about the annotation data (and possible derivatives, like a Greek Readers Edition), I’d just work the text and translate away. But creating the annotation gives me an anchor to look back on. I’ll remember when I looked up that weird word that is likely a Latin loanword (this happens more than I’d realized in the Acts of Pilate), and I find this important.

So I find or make a transcription. Sometimes this even involves typing the Greek or some portion thereof, which can be slow-going, but is also good for familiarizing oneself with the text.

Next step: A few passes looking for typos and correcting them. I’m definitely old-school here; I just see typos much easier on paper than on the screen. So I usually print out the transcription at a larger-than-normal font size (typos scream when they’re bigger, trust me), and mark it up. Then I incorporate those changes back in the transcription.

When that feels good, then it’s write some code to compare words against existing morphological databases. James Tauber’s MorphGNT.org is one source, Perseus is another. If you have half an idea what you’re doing (and understand a bit about Greek and Unicode), you can grab these sources and create a fairly decent dictionary to do brute-force lookups to initially populate a new Greek text with lemma and morphology data. Since I’d like to think I have at least half an idea on these things, this is the way I roll.

Note I say initially because, particularly for participles, nouns, and adjectives, there is need to review and revise based on context (particularly when drawing from Perseus data). And it won’t populate for every word, which means you’ll need to devise a system to track missed items and re-integrate them back into your data. I’ve been doing this long enough that it isn’t usually a big deal (cross your fingers, Brannan!).

Once all of this is done, I have an initial edition of the text to start a translation from. I’ll write some code to output the transcription with morphology and glosses as an HTML document, and that’s what I’ll consult as I translate (and review the morphology data and glosses). It looks sort of like this: 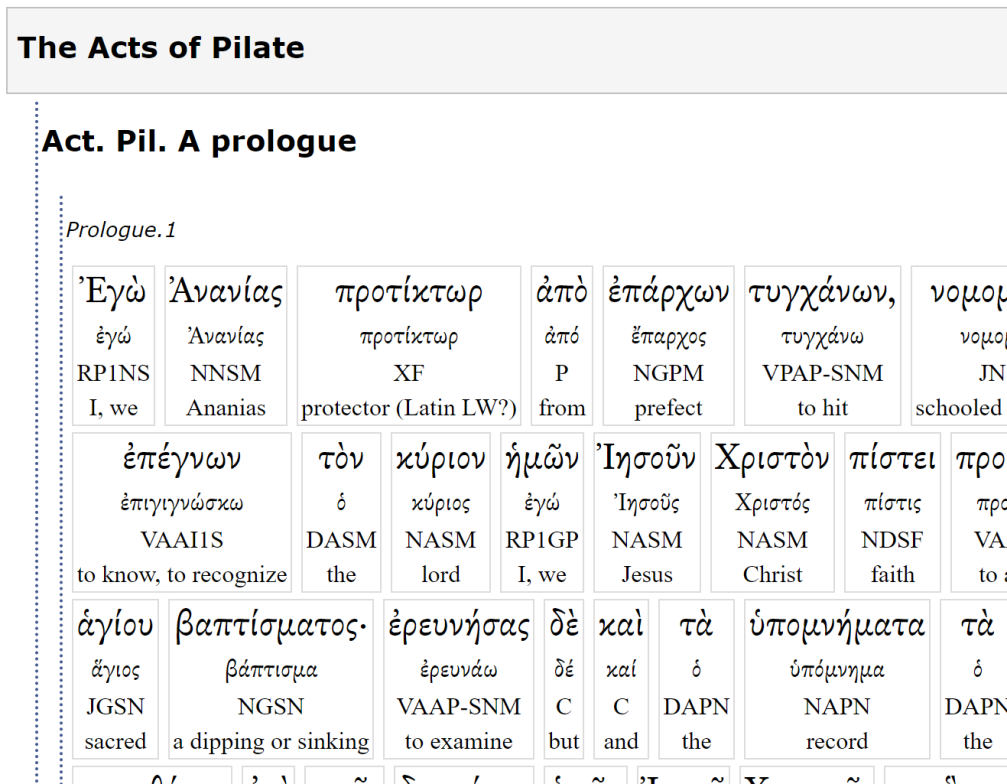 By the time I get to the translation, I’ve already spent a fair amount of time in the Greek text, which I think is beneficial.

My approach with the Acts of Pilate will be slightly different, however.

My ultimate plan/hope (if the typesetter is adventurous enough) is to table the “A” and “B” portions in the translation, so the differences can be more easily seen in the shared portions of the text. Arranging the translation(s) as such should also help me more easily isolate the areas of difference that require comment.

(For the record, apart from noting differences between A and B, and perhaps some text-critical interaction, my hope for the commentary portion is to focus on the use of OT and NT material in the progression of the narrative. But we’ll see if that happens.)

After all of this is done, then I’ll have to write the introduction, without getting too carried away. After all, the Acts of Pilate, whether you know it or not, was a very popular text in antiquity (and straight through to modern times). There are scads of different versions of it in scads of different languages.

Apparently people were really curious about what happened during the trial, death, and resurrection of Jesus. Who’d’ve thunk it?