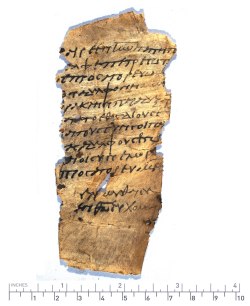 PSI III 208 (TM 33228), another letter regarding transfer of individuals from church to church, is dated somewhere between 250–330. I came across it (again) in Goodspeed & Colwell’s  Greek Papyrus Reader (item #10), but (again) Luijendijk has a more recent and fuller treatment in her  Greetings in the Lord: Early Christians and the Oxyrhynchus Papyri (if you dig the stuff I’m writing in these posts, you’ll enjoy Luijenkijk’s work as well).

I earlier wrote about PSI IX 1041, a letter regarding transfer of church membership. It was sent from Sotas to Paul. Well, that wasn’t a one-off situation. The (very probably) same person, Sotas, sent a very similar letter to a guy named Peter, and today we know it as PSI III 208. The handwriting is different (Luijendijk 84) but the letter is fairly similar. First the Greek, then the translation.

Greetings in the Lord, beloved brother Peter.
I, Sotas, greet you.

Accept our brother Heracles according to custom, through whom I and all the brothers and sisters with me greet you and those with you.

Farewell, I pray you in God.

The basic form of the letter is the same. Note that Heracles is described as a “brother” instead of as a “catechumen.” So these letters serve both as introduction and also transfer status within the church. Heracles doesn’t have to go through the “New Believers” class at the church Peter oversees, but the catechumens mentioned in PSI IX 1041 do have to continue in the “New Believers” class at the church Paul oversees.

This is all so very ordinary. All of these guys — Sotas, Paul, and Peter — probably wrote and received several letters like this. People moved around, and needed some method to transfer their status in the church with them as they moved. We do similar things. We may not require letters, but I have been to churches that, as part of their membership course, wanted information on previous churches attended. If a particular body requires completion of a course or class before becoming a member, it isn’t a stretch to think we might want to get out of taking that class if we’ve done something similar before.

While the formality and the use of particular vocabulary like “brother” and “catechumen” leads us to think more was going on in the instances with Sotas (and it probably was) the underlying motives and thoughts are familiar to us.

Early Christians weren’t that different from us.