Grenfell and Hunt didn’t just publish papyri in the Oxyrhynchus Papyri series, they published all sorts of stuff. One item from them is The Amherst Papyri, and the second papyrus of the first volume is a doozy. 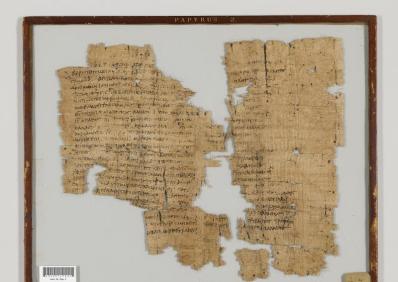 II. Christian Hymn (LDAB 5701, ) isn’t just a hymn, it is an alphabetic acrostic. Each line is composed of three clauses or phrases that each start with the acrostic letter for the line. It is fascinating, and there are Biblical allusions throughout the hymn. It is dated to the fourth century (300–399), and sometimes it almost reads like a creed.

Interestingly, there are a few items that could be classified as agrapha — sayings of Jesus outside of the canoncial New Testament. The line for iota has: Jesus who suffered for this, saying, “I give my back, that you may not experience death.” There are possible connections to Isaiah 50:6. In this case, “give my back” is, I think, a way of saying Jesus gives himself for the punishment deserved by us. His back is whipped in place of ours.  And the line for pi has: He preached the gospel to his servants, saying, “The poor (shall possess) a kingdom, theirs is the inheritance.” This is similar to Mt 5:3, possibly, but not close enough to be anything but a paraphrase, and even that is a stretch.

The below translation is from Grenfell and Hunt, but I have modernized it and made a few changes. The asterisk notes are largely from me, as are the inserted Greek alphabet characters to track which letter a line is related to.

One thought on “Stuff Early Christians Read: P.Amh. Gr. I 2”