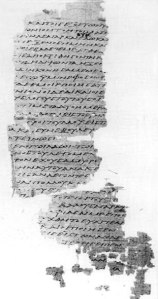 You may or may not have heard, but my employer (Faithlife, makers of Logos Bible Software) has shifted our flagship product, Logos Bible Software on the desktop, to a six-week release cycle. We’ve also introduced a subscription model called Logos Now which provides access to the latest features and datasets that otherwise would’ve waited to be integrated with a major software release.

Anyway, my time for the past six months has been focused on providing new datasets and interactive features that have been introduced with various releases of Logos Now. Some of the coolest and most fun have been what we’re calling “Manuscript Explorer” Interactives. These are tools that allow you to explore information about manuscripts of the Greek New Testament. Want to know more about Majuscule (Unical) gospel manuscripts? Boom. Here’s that list, with information about B/03/Vaticanus expanded:

There’s even a video with more information.

Earlier this week, we released (again, for Logos Now subscribers) a Septuagint Manuscript Explorer. There is less data available for LXX manuscripts, but there is still useful information. For example, what about manuscripts with the Pentateuch (Law) held by the British Library? Boom.

Septuagint manuscripts with the Pentateuch/Law, held by the British Library

Some of them (Rahlfs 426, as seen in the detail) even have links to online images.

Why do all this? The first step in bringing this sort of information into peoples’ study is actually aggregating the information and making it available. With the information available, other systems and approaches can be developed. As one hears in the software industry, most complex systems began as simple systems, and they developed over time. Hopefully we’ll be able to use this data as the simple start of a larger system that integrates manuscript information at various levels of study and research.

Hope you find it useful (and fun!)

6 thoughts on “What I’ve Been Up To: Manuscript Data”