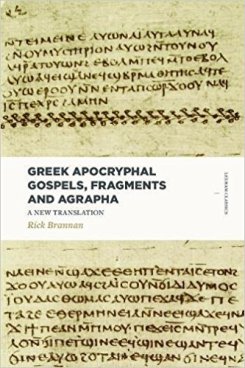 The apocryphal gospels — those documents that relate stories about Jesus but are not considered to be in the canon of scripture — also relate details and aspects of the story of Christ’s resurrection that are not known from canonical gospels. These are typically interweaved with details knowable from the canonical accounts.

The translations below are taken from my book, Greek Apocryphal Gospels, Fragments, and Agrapha: A New Translation, published by Lexham Press. The book is also available for users of Logos Bible Software. The Logos version also has the Greek sources available as a separate resource.

The Gospel of Peter, known from a codex dated between the fifth and eighth centuries, was found in a cemetery in Akhmim, Egypt. It contains some very familiar details and some rather fantastic details of Christ’s resurrection. Here is a selection from GPt 9.35–10.42:

9.35 Now on the night when the Lord’s Day was drawing on, as the soldiers kept guard two by two in a watch, there was a great voice in heaven, 36 and they saw the heavens opened, and two men descend from there with much light and come close unto the tomb. 37 And the stone that had been cast at the door rolled away of itself and made way in part, and the tomb was opened, and both the young men entered in.

10.38 The soldiers, therefore, when they saw it, awakened the centurion and the elders (for they were also there keeping watch); 39 and as they told the things that they had seen, again they saw three men coming from the tomb, two of them supporting the other, and a cross following them. 40 And the head of the two reached to heaven, but that of him who was led by them overpassed the heavens. 41 And they heard a voice from the heavens, saying, “You preached to the ones who are sleeping?” 42 And a response was heard from the cross, “Yes.”

The detail in §10 about the two giant men (angels, their heads “reached to heaven”) and the even more giant cross that overshadowed them is certainly not witnessed in the canonical accounts. Even more interesting is the cross, personified, responding about preaching to those who “were sleeping.” Though please note Mark Goodacre’s conjecture that instead of “cross,” we should read “crucified one.”

Acts of Pilate (Gospel of Nicodemus)

The text known (in its Greek edition) as the Acts of Pilate is also known as the Gospel of Nicodemus in its Latin edition. It was very popular, translated to several different language editions over the centuries and even in to modern times. There are three primary parts: The trial and death of Christ, a part with Joseph of Arimathea and Nicodemus with details on the resurrection, and the Descent of Christ to Hades.

Here is Act. Pil. §13, styled as a discussion that takes place within the synagogue. The context is that the ruling Jews had locked up Joseph of Arimathea in a room and sealed it because of his involvement in putting Jesus’ body in the tomb. The synagogue was meeting the next day (Sunday) to discuss what to do with him. However, when they went to get Joseph, they discovered that he had somehow been taken away from the locked, guarded, and sealed room.

13.1 And while still seated in the synagogue and astonished because of Joseph, there came some of the guard that the Jews had asked Pilate to keep the tomb of Jesus, lest his disciples should come and steal him away. And they reported, saying to the rulers of the synagogue and the priests and the Levites what had happened: “Somehow there was a great earthquake, and we saw an angel descend from heaven, and he rolled away the stone from the mouth of the cave, and sat upon it. And he was shining like snow and like lightning, and we were very afraid and pretended to be dead. And we heard the voice of the angel speaking with the women who waited at the tomb: “Do not fear, for I know that you seek Jesus who was crucified. He is not here, he is risen, as he said. Come, see the place where the Lord lay. Now go quickly, tell his disciples that he is risen from the dead, and is in Galilee.”

3 And the Jews, upon hearing these words, were exceedingly fearful, saying, “Take heed lest this report be heard and everyone starts to listen to Jesus.” And the Jews took counsel and laid down a large sum of money and gave it to the soldiers, saying, “You say: ‘While we slept his disciples came by night and stole him away.’ And if this comes to the governor’s hearing we will persuade him and secure you.” And they took it and did as they were instructed.

So why is this stuff important if it isn’t in the canonical gospels? It shows us, again, that early Christians weren’t stupid. They had questions about things known from the New Testament, because they didn’t make sense. They were amazing and fantastic, and they believed them, but there were still questions they had about the whole thing. They fabricated some details in their telling and retelling of the stories, but that only shows us what information they found necessary to add to make sense of it all. This helps us understand what these early Christians believed, what they read, and how they assimilated it all.

6 thoughts on “Christ’s Resurrection in the Apocryphal Gospels”