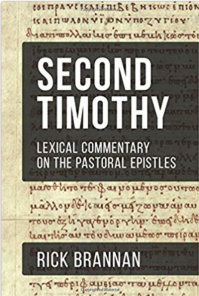 For last year, I was happy to finish my Lexical Commentary on the Pastoral Epistles: Second Timothy. I’m still not sure how it happened, but attribute most of it to a weekend away with my wife (and no kids!) where I blitzed the commentary and she simply slept and recharged.

One of my themes this year has got to be the book of Titus. This is for two reasons. First, the obvious reason, is Lexical Commentary on the Pastoral Epistles: Titus is the obvious next (and final!) installment in my Lexical Commentary series. I would love to wrap that up, so I will need to start on it. That said, I may let the commentary sit until next year (2020) depending on how much time I want to spend on researching and developing Stuff Early Christians Read material.

The second reason to focus on Titus is less obvious. There is a conference in Mainz, Germany at Johannes Gutenberg University in September of 2019 on the topic of “Ethics in Titus.” Jim West mentioned the conference awhile back, and even linked to the schedule. I’ve been invited to give a paper on “Ethics and Language in Titus.” I plan on exploring command language in Titus for the paper; we’ll see where it takes me. I’d like to finish the paper well before the conference to allow some later time for revision and polish, so I’ll probably start research soon (early January) and writing shortly thereafter.

If it wasn’t for the conference in Germany in September, I’d probably want to spend my whole year researching and beginning to write a book length monograph on Stuff Early Christians Read (and Wrote). I have a full length book proposal for this, and think I know where I want to go with it. But I can’t pass up the opportunity of the conference in Germany, so will focus on that first.

That said, I hope to take short breaks from Titus to transcribe and translate some early papryi. I’ve got a spreadsheet full of them to locate, research, encode transcriptions, and translate.